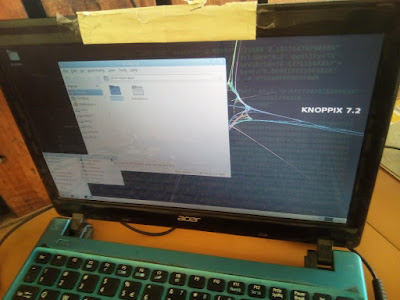 Also in 2019, I shipped another GNU/Linux multiboot to Kalimantan Island, Indonesia. It was KNOPPIX –the first distro known to bring LiveCD technology–. And once again it was not supported by GLIM Maker. But fortunately, I managed to make it works by custom scripts. You can use scripts below to make KNOPPIX multiboot USB. Happy hacking!

Subscribe to UbuntuBuzz Telegram Channel to get article updates directly.

Download it from knopper.net. I was using version 7.2 CD at that time. It was a very lightweight KNOPPIX with beautiful desktop animations.

This code represents first page on the bootloader. This code calls next script inc-knoppix.cfg when we select (pressed Enter) on KNOPPIX entry. That entry will appear only if this script found a KNOPPIXblablabla.iso file within /knoppix/ directory. Please take note that the file name are all capital letters.

This code boots up the real things which are two, the kernel file, and the initrd file, in the last lines. Kernel is called by linux command  and initrd by initrd. The bootoptions are the thing that distinguishes KNOPPIX and other distros, as I found (please give corrections if you have) it will not work except with that bootfrom code. Once again, yes, KNOPPIX works with loopback just as Debian as it was derived from Debian.

Download this KNOPPIX icon and save it as knoppix.png. This icon is what called by the code –class knoppix in the first and second scripts above.

Compare your codes with screenshot below to make sure we put codes in right places.

Once booted up, you will see new entry with the name KNOPPIX on your bootloader. 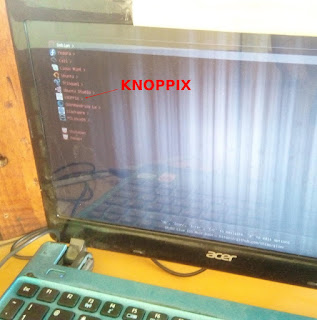 Successful configuration can make KNOPPIX LiveCD runs from multiboot USB. From this point you can run the very lightweight but pretty desktop of KNOPPIX or install the system to your computer. Congrats!

Is the MNT Reform the Most Open Source Laptop, Ever?!

Authenticator, a 2FA Token Generator for Linux, Gets Updated

Google Removed the KDE Connect App from the Play Store (Update: It’s Back)

How can I mix the top app menu with the File, Edit,Selection etc menu? I am new here :D